What is the Beep Boop indicator? Theory, strategies and 100 tests.

What is the Beep Boop Indicator? Theory, strategies and 100 tests

The beep boop indicator is originally based on the MACD 12-26 and the 50 bar EMA. It also adds an emotional state either 'calm' or 'angry' which can affect how it trades.

MACD is based on how moving averages act against one another. If the 2 averages come together, known as convergence, this might be interpreted as a reversal is coming.  If the averages are moving apart, known as divergence then the current trend could be continuing.

EMA is Exponential Moving Average. It is a weighted average with more importance given to recent price data. This differentiates it from SMA which is Simple Moving Average which treats all price data, recent and older, the same.

The Beep Boop indicator was originally made by www.tradingrush.net, it is available for free on their Patreon.

This is their original video from November 7th 2020

It is titled “I taught my computer to trade with EMOTIONS and it WORKED! Intraday Trading Strategies with AI”.

In it Trading Rush, who have an impressive 289k subscribers when this article was written in February 2022, discuss how they traded Forex using the Beep Boop indicator.

The author wants to use Artificial Intelligence to teach his computer to analyze a chart, calculate everything and tell the broker to execute the trade.

What does trading with emotions mean?  It means the bot is happy with winning trades and angry with losing ones, so kinda like a human trader.

So how does the Beep Boop indicator work?

First a custom indicator was created, and after many failed attempts there are 2 working ones. It uses a histogram of the MACD indicator.

It uses a 1-minute chart where the spreads will be a lot bigger, which makes trading more difficult, and will also execute 1 trade a minute which is probably beyond the means and stress levels of a human trader.

The idea of emotions is that when the bot makes a losing trade, it gets “angry” and “revenge trades” by increasing its position size by 10 times.

So you need the bot to get angry in a range and then need the price to make a move in the entry direction after that.

Version 1 of the Beep Boop Indicator

In this first version of the Beep Boop indicator, the very simple methodology of the bot is that if it sees 2 green bars in a row, from the histogram of the MACD indicator, then it takes a long position.

If there are 2 red bars in a row it will take a short position. 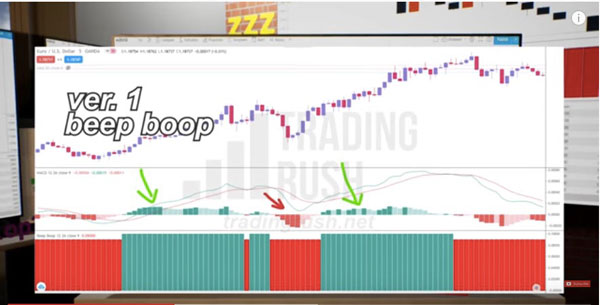 Initially the bot did not take trend direction into account, it now does, and so it only gives entry signals in the direction of the trend. The green candle only appears if the price is above the 50 period Exponential Moving Average, EMA 50.

Remember, the time period is whatever you have your candle set to, so 1 minute, 1 hour etc.

Note that spread is a lot smaller during the overlap of when both the London and New York stock markets are open and trading.

An exit signal means opposite colour bars appearing, for example, a series of green bars and then 1 red bar.

Version 2 of the Beep Boop Indicator

In the second video, the author makes some modifications to the beep boop indicator and then tests it 100 times on a Forex market.

An exit is when the white bar appears, there is no explanation of a white bar is. Also the price no longer needs to be above or below the 50 period EMA Exponential Moving Average, you change this if you like.

If there is a green bar and the price is above the 200 period moving average then the long entry signal is on the first green bar. The stoploss then goes below the pullback, as shown below.

If there is a red bar and the price is below the 200 period moving average, then the short entry signal is at the first red bar. The stoploss goes above the pullback, as seen here:

However, when the trend direction changed it gave false signals.

Ideal conditions for the beep boop indicator are when the market is giving quite small pullbacks in a one-sided market.

As said earlier the beep boop indicator is based on the MACD indicator, it takes entry signals using the MACD strategy but with a few extra conditions and without following the zero line rule.

When MACD or some other strategy doesn’t give an entry signal in a strong trend, you may feel like you are missing out on a big move.

By also using the beep boop indicator, it can give multiple entry signals even in a strong trend.

The beep boop indicator can indicate the trend direction and you can use it while doing multi timeframe analysis.

You should look for long trading opportunities on the entry time frame only.

You can use the beep boop indicator on Trading View, the author has also helpfully provided the source code so that it can be modified and used on other charting platforms.

To Install it on TradingView, just copy the source code from the Patreon page, and paste it in the Pine Editor on TradingView. Click save and add it to your chart. It will be available under the "My scripts" section.

You can modify it if you wish, for example changing the values used for MACD and the EMA.

You might also be interested to learn How profitable is the Zero Lag MACD? and Absolute Strength Indicator: What You Should Know

Have you used the Beep Boop indicator?  Leave a comment below.