Guide to Out of the Money or OTM Calls

Guide to Out of the Money or OTM Calls

What are OTM Calls? In order to understand what out of the money calls are, and why they are so cheaply priced, we first need to have some basic understanding of what options are.

Options are like a contract, or an agreement between a seller and a buyer. The buyer will pay some fee in order to receive a guarantee from the seller that they will be allowed to buy a stock at a given price in the future.

There are three types of call options:

All of them refer to the internal, or sometimes extrinsic, value of the stock, also known as the Moneyness. 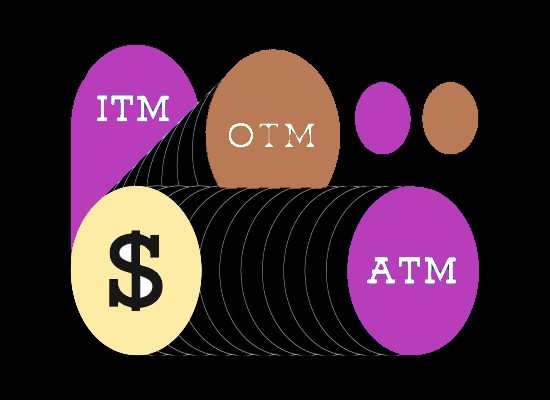 OTM calls, or out of the money calls, occur when the strike price which is agreed upon in the option is higher than the current market value of that stock.

An ATM call, or at the money call, occurs when the strike price and the market value are the same.

Likewise, an ITM call, or in the money call, occurs when the strike price is lower than the current market value.

Let's look at an example to understand OTM calls better.

You buy an option for stock X, the strike price is $110 and the expiration date is 7 days. This means that, in seven days, you can buy stock X at a value of $110.

In an OTM call the fee, also known as the premium, which you would pay to enter into this agreement would be very low. Let's say $1. The reason for this is because the current market value would be far below that of the option strike price.

In a case where the market value is $100, it would be very difficult for the price to move almost 10% higher in 7 days, which is what you would need for the option not to fall through. Anything under that, you would not be forced to buy at the higher rate, but you will lose the premium. A profit, loss graph of this can be seen in the figure below. 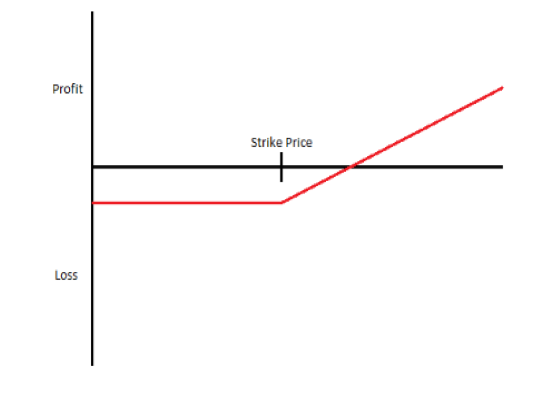 In the case of this example, the strike price, as mentioned above, would be $110. Up until that point the loss that is made is constant as viewed by the straight red line above. It is only at the strike price that that changes, and then the cost of the premium as well as brokerage fees still need to be taken into account, so an overall profit is not yet achieved.

However, as can also be noted in the red line above, the potential profit is theoretically endless. As long as the stock price continues to increase, which it could do into infinity theoretically, so does your profit. This is one of the many appeals of options trading in general.

OTM calls have no intrinsic value, but instead rely on extrinsic factors to provide a profit. 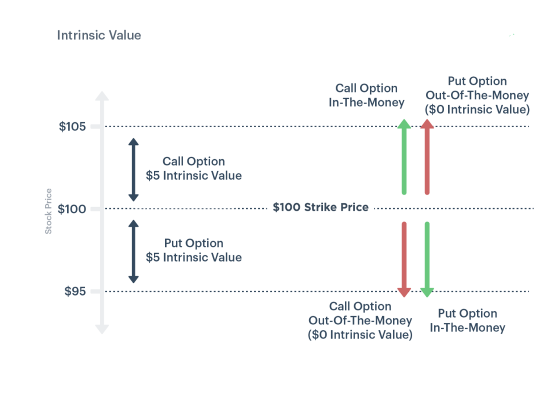 If it is an ATM call, the premium may be a little bit higher, let's say $6, but the strike price and the market value will both be the same, at $110. This means that even if the price moves a fraction of a percentage higher, you will be making money. However, if it moves any lower you will still lose all of your premium, which is now higher.

In the case of the graph above, one can visualize an ATM call option on the strike price, where the horizontal line and the line with the positive gradient intersect. This is still an overall loss due to brokerage fees and premium, but it is far easier to start making a profit than if you were to start against the Y-axis, as one would in the OTM example above.

An ITM call occurs when the market value is already below the strike price. In this example the premium may be $10, but the market value may be at $120, giving you almost instantaneous profit as long as the value stays high enough that it compensates for the premium.

This potential for immediate profit is sometimes referred to as the intrinsic value of the asset. There is a considerable buffer if the market value fluctuates on the day of expiration, which is why many traders will not enter options contracts unless they are in the money.

In the graph above, you will usually enter a position on the positive slope, rather than on the horizontal line. It is important to note that - although it does occur a lot of the time - when the premium and brokerage fees are taken into account, there may not quite be a profit yet, but it is still in the money.

The Lure of OTM Calls

As can be seen above, OTM calls usually have a very low premium, meaning that there is very little money that a trader would have to provide upfront, in order to enter the deal. However, there is also a large chance that you will lose that money.

Remember, options are all or nothing. This means that, even if your predictions were correct, and the price of the stock increased, if that increase is even a fraction of a percentage below where you need it to be, then you will still be making a rather large loss.

Often, the dangers of OTM calls are not understood by traders who are newer to options and who are attracted by the low premiums. These are the exact traders who should not be looking at OTM calls.

OTM calls can be extremely profitable. But, it is very difficult to identify the situations in which the tradeoff between the low premium and the Moneyness will work in your favor. These situations can usually only be identified by experienced option traders.

However, there are some ways in which even new traders can make use of OTM calls to help them profit from options trading by managing their risk.

Managing your risk with standard OTM calls is rather simple. Due to the fact that the option will simply fall through if it expires with the market value below the strike price, there is a maximum risk which can be calculated as the value of the premium and the relevant brokerage fees.

This maximum risk, and potentially endless profit, can be used to offset the potential losses in ITM options with higher premiums in what is known as a straddle or a strangle.

Briefly explained, these strategies involve one bearish option position and one bullish, both of which will offset the losses in one another, and sometimes even result in a profit regardless of which way the asset's price moves, as long as it moves enough.

The maximum risk and potential profits in these cases can be easily calculated through the use of an excel spreadsheet, which means that new traders do not have to rely on their instincts, but can easily enter trades where they are aware of all the possible parameters.

Due to the all or nothing nature of options, risk management becomes critical to avoid extreme losses - in some cases even blowing up whole accounts - so this is ideal. 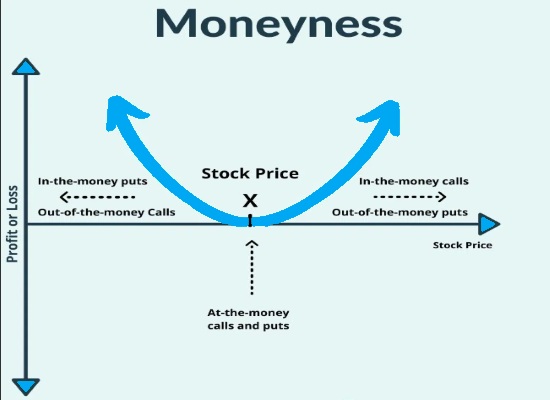 It is an important figure to take into account before entering any options trade, and especially in an OTM call or put as it will give some indication as to the possibility of reaching a profitable number.

Any option with a delta of less than 0.5 is out of the money. The closer it is to 0.5, the less out the money it is, and the more likely that you will be able to make profit if the market moves in the direction that you would like.

The most out of the money possible, is a delta of 0. These options will likely sell for a very low price, but because there is almost no chance of them finishing in the money by the expiration date they are almost guaranteed to expire worthless.

It is important to consider the delta of OTM calls in order to ascertain if it is worthwhile for you to take the chance, or if it is very unrealistic.

Although OTM Calls may, at a first glance, seem like a very poor investment, they can be very profitable if used correctly.

They are, however, higher risk than ITM or even ATM call options. For this reason, it is recommended that you do not attempt to trade OTM calls if you are not an experienced trader. Instead, use them alongside other options contracts in order to minimize your risk.

Remember, options trading is not for everyone. Options are higher risk than stocks, bonds, mutual funds etc so as always you need to trade responsibly.