VUG vs VOO: Best Vanguard ETF for You?

VUG vs VOO: Best Vanguard ETF for You

VUG vs VOO, it can be difficult to determine which ETF is the best choice for you considering your circumstances and personal investing style. The Vanguard Growth ETF (VUG) and the Vanguard S&P 500 ETF (VOO) are both popular, low-cost ETFs with relatively low risk in comparison to investing in individual stocks or options, but there are a few differences between them.

But, before we look into the differences between them, we first need to understand what an ETF is.

VUG vs VOO: What is an ETF

An Exchange Traded Fund, is a pooled investment security. It generally represents, or tracks, the price of an index, or a list of assets and commodities. It is very similar to a mutual fund, but can easily be traded just like any other stock.

In other words, it is almost like a stock, but instead of the price representing the value of a single company, the price of the ETF represents the price of another stock, or a collection of other stocks. 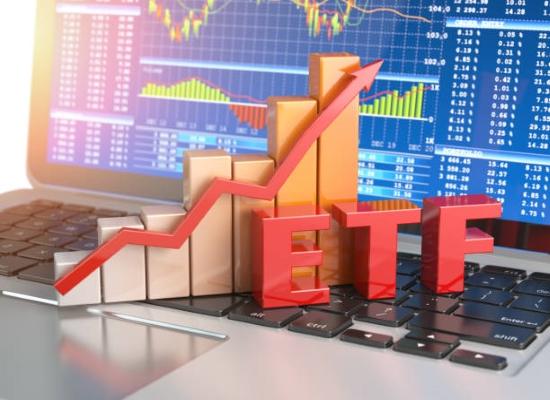 There are a variety of different ETFs available to invest in. They are often considered good ways to bulk up a portfolio because of their low risk. They achieve this low risk because they often represent multiple stocks, so if the value of a single asset suddenly drops, the overall price of the ETF is not affected as much; the assets that increase or remain stable act as a buffer of sorts.

The lists of stocks and commodities that the ETFs contain, and the quantity of the ETF that they make up, will determine whether the ETF is better for long term or short term investment, whether the ETF is higher or lower risk, and many other factors.

So, now that we have looked at the basics of what an ETF is, let's look at the differences between the popular VUG and VOO ETFs in order to determine which is best to add to your portfolio.

The CRSP US Large Cap Growth Index is made up of only US companies that make up the top 85% of investable market capitalization. In other words, it is only made up of stocks that have already been deemed as major growth stocks.

It is heavily comprised of tech companies because many of the determinants of defining a growth stock are historical factors, and tech companies have performed very well in the last five years and more, as can be seen on the figure below of Apple Stock AAPL, which makes up more than 10% of the VUG Index at the time of writing this article on July 26th 2022.

The S&P 500 Index however, is not predominantly focussed on growth stocks, but is instead made up of 500 of the largest companies in the US in terms of market capitalization.

It aims to have a price which acts like a quick glimpse at the entire US market. In other words, if you are investing in the VOO, it would almost be like investing in the market itself. If the entire market dips, so will the value of the S&P 500. As long as the general market stays bullish, the S&P 500 will, theoretically as well.

Although they have different goals, many of the stocks that the indexes are made up of are the same, with Apple and Microsoft making up the largest portions of each.

However, another factor that affects the ETFs is the quantity of each of their respective Indexes that they have holdings in.

VOO holds almost double the amount of stocks in its index as VUG. This means that the VOO ETF will be significantly less volatile than VUG, making VUG higher risk.

In order to determine if this increased risk is worthwhile, we need to look at the potential profit by analyzing performance. 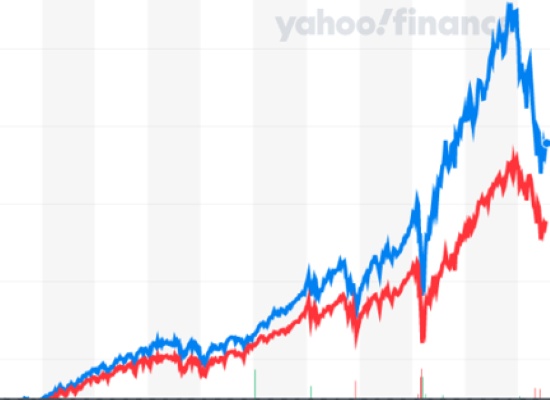 As can be seen in the above image where VOO is represented with the red line and VUG with the blue, since 2015 VUG has clearly outperformed VOO, which is to be expected when considering that it is made out of high growth stocks.

However, both ETFs seem to track the overall conditions of the market, with a general uptrend visible in both, as well as general market dips affecting both.

The VUG ETF over the past ten years has grown by approximately 18.58%, while the VOO ETF has grown by 16.15% with both showing signs of a peak in December 2021.

The difference in risk is also visible. As can be seen in the forming downtrend, the VUG (Blue) is decreasing far faster, and "catching up" to the VOO (Red).

For those considering holding the VUG ETF for extensive periods of time, this might not matter, and may even be a good time to invest, with the hopes that when the market turns, VUG will rise faster than VOO.

However, for short term investors, who do not think that they will hold the position for more than a few weeks or months, this can prove to be worrying.

If a mistake is made in the research and technical analysis before the trade is placed and market conditions are unfavorable to the trade, this would indicate that the potential for the ETF to move is a lot bigger than that of the VOO ETF. Higher risk, as well as higher reward is possible.

It is important to consider the movement of the ETF and the underlying asset before purchasing it, but it is also important to know if there are other costs involved in holding the asset.

Because these assets are considered better long term holds due to their relative stability, months or years, we will not look at the cost of acquiring these stocks such as commission and brokerage fees. Although, these will still be applicable like in any other situation and will differ from place to place.

There is an additional cost, per annum, to hold the stock. This can influence the overall profitability of keeping the trade.

This means that for every $100 of the stock owned, you would be liable for 3 cents (VOO) or 4 cents (VUG) per year. This difference is very small when considering investing in only a few shares, but for big hedge funds or professional traders dealing with large quantities of capital, it can make a rather big difference.

However, due to the size and reputation of the ETFs, this happening is very unlikely.

Additionally, due to the general stability and low risk of the ETFs they are often considered by those with large quantities of wealth who wish to grow it slowly and reliably, earning and sometimes solely living off the passive income that is generated by dividends.

If you are looking at low risk stocks purely for the purpose of passive income, then both of these are suitable, however, the VOO is far superior to VUG in this regard. VOO yields approximately 1.37% in dividends, while VUG yields far lower with 0.46%.

Which Vanguard ETF is Best for You

Now that we have analyzed some of the aspects of Vanguard's VUG and VOO ETFs, which one is the best?

Both are very good options to include in your portfolio due to their low risk, however, if you are trying to emphasize overall portfolio growth, and are willing to take on slightly higher risk, understanding that you may have to wait out dips in the market in order to become profitable, then the VUG ETF is the better option due to the emphasis of growth stocks in the Index Fund.

However, if you are trying to maintain wealth, or play it safe with extremely low risk, then it is better to look further into the VOO ETF. This will allow stable growth that will keep up with, and exceed inflation by a percentage or two most of the time.

Additionally, this is the better option if you are investing with passive income in mind, due to the low maintenance required, as well as the high dividend yield in comparison to the VUG ETF.

Remember, risk management is the key to becoming a successful investor or trader.

After understanding VOO vs VUG ETFs, you might also want to know about SPLG vs SPY and ICLN vs QCLN Energy ETF Comparison.